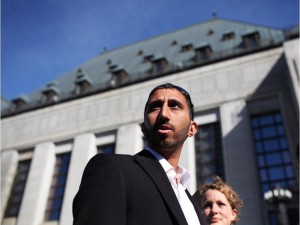 Canadian citizenship is under attack and a native-born Canadian is at the epicentre. The government has stripped him of his citizenship, leaving a craterous void in his legal status. He has never lived anywhere else, and now he is not supposed to live here.

By any sane metric, Deepan Budlakoti is Canadian. Born in Ottawa, the 24-year-old has lived his entire life in Canada. His parents immigrated from India, working for the Indian ambassador. It was around the time they left these jobs that Budlakoti was born, and upon this quirk does his citizenship ride.

The government claims his parents still worked for the ambassador when Budlakoti was born; if true, the law does not automatically grant citizenship to Deepan. His parents and their former employers disagree, but the importance of Budlakoti’s case transcends his parents’ resumes. The very notion of birthright citizenship is peril.

Birthright citizenship is egalitarian in nature, providing protections to anyone, regardless of race, religion, class or wealth. It ensures the vulnerable cannot be denied their rights. In being born here, one lays equal claim to being Canadian.

But Budlakoti was not merely born here. He grew up here. He has made a life here. Unfortunately, he also committed crimes here. It was nothing as serious as treason, but guns and drugs. With this opening, the government has decided that they will deport this Canadian man, even though there is no other nation which he could call home. Our government has left him stateless.

And left to its own devices, Budlakoti would not be the last native-born Canadian to be stripped of citizenship.

Last week, Bill C-24 received final passage and Royal Assent, enshrining in law a dangerous expansion of governmental powers. The new law, ironically named the Strengthening Canadian Citizenship Act, weakens the bonds of citizenship, potentially threatening the very essence of citizenship. Someone found guilty of treason, high treason, espionage or terrorism can have his citizenship revoked without even the benefit of a judicial hearing.

You will be excused if you mistakenly think this law targets foreign-born Canadians. Such targeting is implied, but even native-born Canadians could be deported. Under the guise of “strengthening” citizenship, citizenship is deeply compromised.

Upon seeing the words “treason” or “terrorism”, we may wave away concerns about the over-zealous application of this law. No one wants terrorists running loose in Canada. Unfortunately, the language of the law affords the government with the power to strip Canadian citizenship for not only traitors, but political activists, as well. If a citizen were to be labelled a terrorist by a foreign nation — perhaps the United States, Britain or Israel — the powers of expulsion would kick in.

Again, we might scoff at the concerns of deportation of such agitators. We might not see a threat to regular Canadians. Sadly, the attempted deportation of Deepan Budlakoti demonstrates our government is capable of unjust, punitive deportation.

It is a terrible thing to have no home, and it is inhumane for our government to seek the power to rob citizens of theirs.

Jonathan McLeod is a general fellow with the Canadian Council for Democracy.