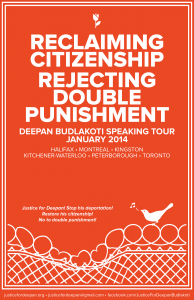 Deepan Budlakoti is an Ottawa-born construction worker and activist who, in 2010, was stripped of his citizenship by the Canadian government. He is now a stateless person pitted in an incredible battle against the Conservative government over his entitlement to citizenship. The government is attempting to deport him to his parents’ homeland, India, a country where he has never lived and does not have citizenship. See more info about his story here: www.justicefordeepan.org

Deepan is currently travelling across Canada to tell his story and seek support. He will be speaking about his experiences as a young man in criminal prison, in immigration detention, and his current conditions as a stateless person. His struggle connects to issues of criminalization, racial profiling, prisons, immigration detention and, more broadly, questions of identity, belonging and borders. Who is entitled to Canadian citizenship? Who is excluded and how are exclusions justified? Who is subject to deportation and double punishment? Come out to hear Deepan and join in the discussion.