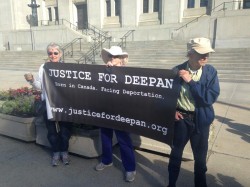 Deepan Budlakoti was born in Ottawa and held a Canadian passport until 2011, when he was convicted for selling a hunting rifle to an undercover police officer.

His arrest led to an investigation and he was ordered to be deported.

He has also faced drug trafficking charges in the past.

Budlakoti’s parents came to Canada, working at the Indian High Commission and argue they left before he was born.

“My parents left the country, got a work permit and re-entered the country with the work permit working for a Canadian doctor and then I was born,” said Budlakotti.

“It makes no logical sense what the government is trying to say.”

However, the government contends his parents were still diplomatic staff when he was born in 1989, meaning Budlakotti’s passports were issued in error.

Deemed criminally inadmissible to Canada, Budlakoti faced deportation but was rejected by India.

Budlakoti hopes to stay in Canada, and considers it his home.