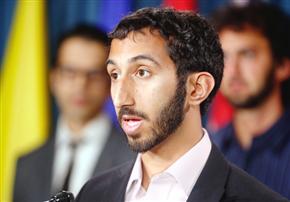 Deepan Budlakoti, a Canadian born of Indian parents who is under threat of deportation to India because of a drug offence, was on Parliament Hill Wednesday with lawyers and supporters pleading his case against deportation. Photo Credit: Julie Oliver, Ottawa Citizen

OTTAWA — New evidence shows the federal government is breaking its own law in its efforts to deport a 23-year-old Ottawa-born man to a country he has never visited, his lawyer claimed Wednesday.

Deepan Budlakoti, currently living with his parents in Nepean, is effectively stateless with the Canadian government claiming he isn’t a citizen and trying to deport him to India, and the Indian government saying it doesn’t want him.

Budlakoti was convicted on drug related charges in 2010 and was apparently reported to immigration authorities by a guard at the Ottawa Detention Centre.

Because he was born to parents working at the Indian High Commission, federal immigration authorities said that according to federal law, he did not automatically qualify for Canadian citizenship.

But at a Parliament Hill news conference Wednesday morning, Budlakoti’s lawyer Peter Stieda produced a letter from the former Indian High Commissioner to Canada, S.J.S. Chhatwal, certifying that Budlakoti’s parents left the commission before their son was born.

That, said Budlakoti, makes the federal government’s effort to deport him illegal because he is no longer disqualified from becoming a citizen.

His parents did not attempt to take out citizenship for their son because they assumed he was a Canadian automatically, having been born here.

Budlakoti has a Canadian passport but the government has since said that issuing it to him was an error.

“I was young, I made a mistake and now I’m getting double punishment,” Budlakoti told reporters. “I did my time, finished my sentence, but unlike others who pay their price to society I face being removed from my home.

“India is not my country. The Canadian government is trying to deport me to a country I’ve never been. I am not a citizen of India and have few ties.”

In an emailed statement, Alexander’s spokesman Alexis Pavlich said Budlakoti was being deported for “serious criminality.

“This convicted criminal has never been a Canadian citizen,” Pavlich wrote. “He should not have chosen a life of crime if he did not want to be deported from Canada.”

Pavlich said Budlakoti was part of an application for permanent residence made in 1992, which would have been unnecessary had he been a Canadian citizen, and that no application for citizenship was ever made by Budlakoti or on his behalf.

If the government refuses to halt its efforts to deport Budlakoti, Stieda said they will take legal action.