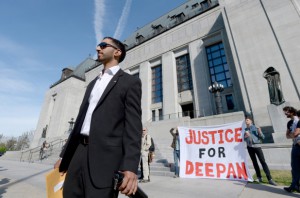 Deepan Budlakoti wants his Canadian citizenship, and his life back.

The 24-year-old former resident of Ottawa had a Canadian birth certificate and passport until he was convicted  in 2010 and sent to prison for three years for selling a hunting rifle to an undercover policeman.

Since his release, the federal government wants to strip Budlakoti of his citizenship, claiming it was issued in error, and deport him to India, where his parent’s are from, even though he’s never been there.

Budlakoti’s  lawyers argued his case before the Federal Court on Monday. A decision on whether he should have his citizenship reinstated is expected to take anywhere between six to 12 weeks.

The federal government argued Budlakoti’s citizenship was issued in error as his parents were still employed by the Indian High Commission when he was born in Canada in October, 1989.

The Canadian Citizenship Act states that anyone born in Canada is eligible for citizenship unless their foreign-born parents are employed as diplomats, consular officers or employees of the foreign embassies.

“The government has, in my opinion, acted arbitrarily in Deepan’s case,” said Stieda in an interview following final submissions. “The discussion isn’t even there about the legality of his citizenship. It’s clear, according to the Act, that Deepan’s a Canadian citizen. He’s paid his debt and hasn’t committed a crime since 2009. This is a case of the government widening the scope of ineligibility for citizenship so that it’ll be easier for the Minister to strip citizenship and deport anyone convicted of serious crimes like terrorism in the future.”