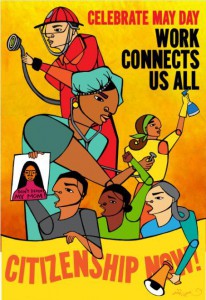 Today is May Day!  Join the migrant justice contingent in Ottawa along with No One is Illegal and Justice for Deepan and march with us! Organized by Solidarity against Austerity, join our allies in fighting back against the austerity agenda.  Where?  McNabb Park (Gladstone & Bronson), 4pm gathering, 5pm march.

We express our deep gratitude to all our allies in the Labour movement who have and continue to provide their resources, time and energy and express their solidarity in many ways with Deepan and his struggle against double punishment.

As we celebrate the labour movement and reflect on the toil and struggles of our comrades, we reflect on the countless brothers and sisters who live and work within our borders without status.  Like Deepan, contributing countless of hours in sweat and labour within our border, they are told they cannot stay and have no right to health care, social services, and the many other institutions accessed by the wider community.

Amidst the recent jingoistic calls for moratoriums on foreign workers in media, we join our many allies in calling for status for all.  Such narratives only serve to facilitate worker to worker micro aggressions that aim to divide workers and those who are unemployed instead of recognizing one another’s solidarity in the face of an exploitative employer and system.

We denounce the many unjust policies that are designed to exploit migrant labour, like the “guest worker” program, which facilitates a growing class of workers without rights.

These policies exploit the labour of immigrants, and non status people whose movements are increasingly attacked while the very companies that rely on their labour are free to move profits and operations with subsidies and no limitations and boundaries.

We also urge you to take time to reflect on the many workers struggling with their past or present interactions with the justice system.  Like Deepan, these workers, previously criminalized, complete prison sentences, only to realize after release they are unable to work in the bulk of prospective employment opportunities available to them.  This opens the door to countless labour abuses that many people face when exiting the prison system.  Criminal records checks that limit accessibility to employment facilitate workers into an unemployable class, either forcing people into exploitative and precarious labour, or economies that are criminalized.

Deepan worked since he was fourteen years of age. This work included amongst others, construction work, fork lift operating, tow truck driving, and dispatching.   After political pressure, Deepan secured a work permit allowing him to be able to work, following which he worked countless hours and overtime hours, a testament to his dedication and work ethic, in direct juxtaposition to a cruel state that now tells him he has no right to be here.

Status for All! Raise the Rates!