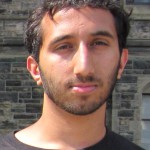 Most people born and raised in this city don’t have to apply for a work permit to be allowed to support themselves. But if you live in a stateless limbo despite your Canadian birth certificate, as 23 year-old Deepan Budlokati does, you might have to work your way through the bureaucracy just to perform some menial paid labour. And when Citizenship and Immigration Canada (CIC) puts your work permit application on hold, you, like Deepan, might be incensed.

In 2011, the Immigration and Refugee Board of Canada ordered Deepan deported to India, where he has never lived and knows no one. This is due to a technicality of the Citizenship Act that says a child born to parents who are foreign diplomats, or foreigners working for a diplomat, is not a Canadian citizen.

Deepan’s parents, now Canadian citizens, never applied for his citizenship because they figured he already had it – after all, he had been born here and issued Canadian documents that confirmed his citizenship, such as a passport and birth certificate (which the state now says were issued in error).