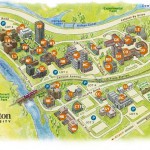 Map of Carleton: Dunton is the tall tower in the upper-left.

Under Canadian immigration law, non-citizens who are convicted of criminal offences are punished twice: first when they are sentenced for the crime; and a second time by being declared ‘inadmissable’ and deported from Canada.

The case of Deepan Budlakoti exposes the injustice of double punishment in an extreme way. Deepan was born in Canada. His entire family lives in Canada. He grew up believing he was a citizen and held a Canadian passport stating he was Canadian. However, an obscure part of immigration law allowed the Canadian government to contest his citizenship because of his parents’ alleged status at his birth and thus, when he got in trouble with the law, to punish him twice for the same thing.

Deepan is now facing deportation to India, where he has never lived, has no family or ties, and of which he has little knowledge. Moreover, India does not recognize him as a citizen and has refused to issue a travel document for him.

All are welcome and encouraged to attend!