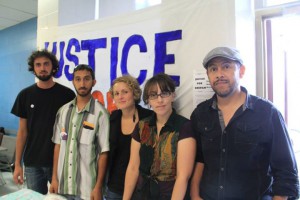 Deepan with members of his support committee, 10 Aug 2013

Here is the text Deepan delivered on Prisoner Justice Day, 10 August 2013 in Ottawa.

Hello my name is deepan budlakoti and i will be talking to you today about my
provincial and federal time and immigration hold time.

I got charged for transfer of firearm and break and enter in 2010 i was held at ottawa carleton detention centre for 1 year before i was sentence to 3 and a half years.

In ottawa carleton detention centre OCDC you are locked up for 21 hours a day in a pod where the TV is in the corner which some cells can’t even see and you go on lock down quite often since you are out for only three hours a day and there are 32 guys in a range and there is 4 phones and two showers. We get yard every other day if you are lucky sometimes you don’t get yard for a week. I personally hate ottawa carleton detention centre they treat you like you are a dog in my opinion.

I personal got in to a fight over a newspaper by just asking the guy who had it before me to see if i could read it and when i was reading it and out of nowhere i guys comes up to me and said it is my turn to read the paper and it all started over that. me and my co accused got in with others and at the end i was put in the hole for 30 days.

Being in the hole you have no rights whatsoever you are lucky to get a tooth brush and toothpaste, there is no cameras in the hole and you sleep on cold concrete in the day and at night they give you a sheet and a one inch think plastic bed with a built in pillow which makes it even harder to sleep on.

Then in the morning they wake you up and take everything away from you and
you have to bug them to get to use the phone and i remember when i used the
phone there the phone shocked me.

Once i got sentence to federal time i was sent to millhaven and was there for 9
months and the food and the set up is bad as well then i got transferred to
joyceville institution and I was there for 11 months and i could not down grade to
lower security since i had immigration issue they said to me that i am a flight risk
even though i am born in canada.

We are locked down a lot in joyceville at one time we were locked up for 3 months in your cell and you were out every 3 or 4 days for 15 mins for a shower and a quick phone call.

I was working for corcan in joyceville and i was getting paid 2.30 an hour for 6 hours a day for 5 days a week and every two weeks we get paid i had to pay room and board which is 30 bucks and then 7 dollars for inmate welfare as well since i was working for corcan. the average pay is 60 bucks every two weeks for a regular job. I also went to school and took law courses to get up to date with immigration and criminal and corporate law part time.

I kept busy and did my own time and did not allow others to do my time and that way i kept out of trouble. I was one range 4 D the fourth floor with 38 guys with two showers and two phones and two fridges with two oven tops.

Then when my time was up got released on my sat date and at AD i got arrested by CBSA canada border services agency.

I was transferred to toronto west detention centre and not back to ottawa were i
came from in the first place. I had a detention hearing in 24 for hours which they
said to me that i am a flight risk and a danger to public even though CSC correction
service canada classified me as low risk to public safety. then i went for a 7
day hearing and then same reason came up again and then i had a hearing every
30 days for 5 months.

I was in a cell with three guys and slept on the floor for a month and a half before a bed came available the place was packed all the time we had mixed with immigration and guys on criminal charges. Some guys just tried to come into canada and got pick up at the airport and they wanted to apply for refugee states and had no record or anything but got thrown in jail.

The food you get is like a dog dish amount and some of the food your dog would not eat in my opinion. You have one TV on range and three phones and ten cell per a range with 30 guys on range. i was on 3A left. every single cell had bars doors and the toilet was in front so when ever you use the washroom you can see right into five other cells. so you had to use your bed sheets to cover the grill and then another bed sheet across the cell so the two other guys don’t see you.

and if you are on lock down it was bad. you had a hard time getting toilet paper from the guard and they come by every 15 mins with a scanner every night and each time it beeped and that happened 4 time on the range before they walked out and it was loud so it takes some time to get use to in order to sleep at night.

We were let out in the morning at 9 am and then locked up at 5 pm every day and after five and a half months I got released on bail on house arrest.

i am currently stateless and cannot work in canada and i am still on parole.

I also want to share this injustice that is happening to me and to others all around
canada and i what to point out that it is important that we work together to fight the
injustice that happens.

other then that feel free to visit my site at www.justicefordeepan.org no spaces and
sign on my online statement and stay tooned for up dates. Also feel free to talk to
me about anything around my jail time and immigration case if any one has
question i will be walking around.