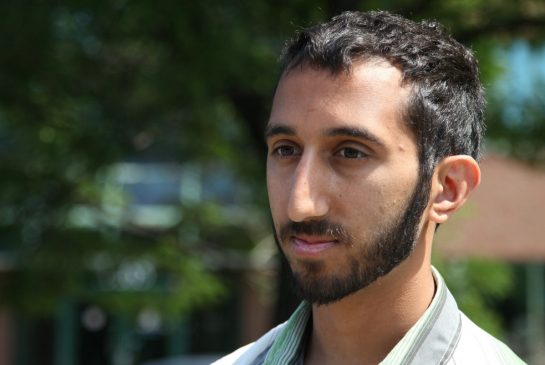 Canada is the only home Deepan Budlakoti has known, but now the Canadian-born man is facing deportation from his homeland.

At issue is whether Budlakoti’s parents were still working for the Indian embassy in Ottawa at the time of his birth 23 years ago and whether he should be recognized as a Canadian citizen.

While Ottawa grants citizenship to almost every person born on Canadian soil, an obscure provision in the citizenship act stipulates exceptions to those born to parents working in Canada for foreign governments or diplomatic officers.

Budlakoti said his parents arrived in Ottawa in 1985 from India as domestic help to do gardening, cleaning and cooking for the then ambassador of India. He was born on Oct. 17, 1989, and issued an Ontario birth certificate and twice, a Canadian passport.

Questions over his citizenship arose in 2010, after Budlakoti served a three-year jail sentence for drug and weapon charges. Upon his release, Ottawa initiated removal against him claiming he was born while his parents were employed by a foreign government.

A federal tribunal held a hearing in 2011 and deemed Budlakoti inadmissible to Canada. In the meantime, the Indian government said he is not an Indian citizen and refused to issue him a travel document.

“What the government is doing is wrong. How can they give me a passport which says that I am a Canadian citizen and then take it away saying they gave it to me in error?” Budlakoti said at a news conference Wednesday in Ottawa.

“I have always believed and still believe I am a Canadian,” Budlakoti said. “I was born here. I had every document a Canadian would have.”

Budlakoti’s story had yet another twist Wednesday when a former high commissioner of India in Canada issued a statement asserting that the man’s father stopped working for him in June 1989, four months before Budlakoti was born.

Budlakoti’s lawyer, Peter Stieda, said his client is essentially stateless right now and only has three options to reclaim his citizenship: asking Immigration Minister Chris Alexander to intervene, demanding the Immigration and Refugee Board to reopen Budlakoti’s inadmissibility hearing or filing a Charter challenge with the federal court.

“There is absolutely no reasonable basis to doubt that Deepan is Canadian,” Stieda said. “Rather than stripping him of status, this government is legally obliged to restore his citizenship.”

Alexis Pavlich, spokesman for the immigration minister, said Budlakoti was part of an application for permanent residence in 1992 and the fiasco would not have been necessary had he applied for citizenship.

“This convicted criminal has never been a Canadian citizen. He should not have chosen a life of crime if he did not want to be deported from Canada,” Pavlich said in an email to the Toronto Star.

“While it’s true that Mr. Budlakoti was issued a Canadian passport, his passport application claimed incorrectly that he was a citizen. This false information led to Mr. Budlakoti receiving a passport that should not have been issued.”