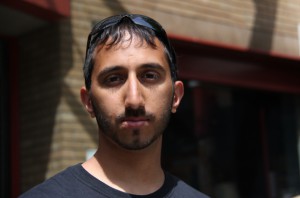 Deepan Budlakoti is facing the possibility of being deported to India. The catch? He’s not Indian. In fact Budlakoti was born and raised in Ottawa, but now the federal government wants him gone.

He has a Canadian birth certificate and up until he was convicted and put into prison for three years in Ottawa in 2010 for selling a hunting rifle to an undercover police officer, he held a Canadian passport.

Since then Budlakoti says the federal government has stripped him of his passport stating it was issued in error, and has tried to deport him to his parents’ home country of India.

“I have no family there anymore, no friends, nothing,” he said. “My home is in Canada. I’m Canadian. My family and friends live here, and I grew up in Ottawa. I’ve been there all my life.”

His parents have also been Canadian citizens for decades and so is his younger brother.

Budlakoti is now in a very unique situation as he technically has no citizenship to any country on the planet.

“Currently I’m classified as stateless,” he said. “The problem with being stateless is now I have no healthcare services and I’m under heavy limitations all the time.”

Since his release from prison in 2013, Budlakoti got one job at a construction company, but once they found out about his status they quickly let him go. He hasn’t been able to find anyone who would hire him since then.

His personal problems aside, Budlakoti fears if he can be stripped of his citizenship through a legal loophole then the system is open for abuse.

“It jeopardizes the conception of citizenship,” he said. “If they can take away my citizenship, what’s to stop them from taking away anyone else’s? Everyone in Canada at one point was a settler, other than the First Nations.”

Budlakoti said he’s paid his debt to society and it’s not right for him to live each day in fear.

“All I want is to be allowed to live a normal life,” he said.

Budlakoti spoke about his case in Vancouver on Wednesday, May 14. He’s been travelling the country to raise awareness of his fight to regain his citizenship.